Tusher was hired in July 2019, and has spent most of his life thinking about lighting and production. Before UCR, Tusher worked on the theme parks Universal Studios Japan and Movie World Madrid, and most recently he spent 17 years working for the nonprofit The Wooden Floor as Director of Production and Operations.

The Wooden Floor is especially close to Tusher’s heart because it is an afterschool program in Santa Ana for students ages 8-18 that offers ballet and modern dance classes to low-income youth.

“It was bittersweet to leave them,” Tusher said, ”because I love their mission. But when this opportunity came up, I said ‘that is absolutely where I want to be.’ ”

Coming to UC Riverside was like coming home. Tusher received his bachelor of arts in theatre from UC Riverside, and his master’s degree in lighting design from UC Irvine.

“I always had a connection to UCR, having worked on and off as a guest artist in lighting design since 1999,” he said. Tusher was also a visiting professor in 2004, teaching lighting design for the department.

Now, as Production Manager at UCR, Tusher collaborates with the entire production staff.

“I’m responsible for making sure all the cogs of the wheel are working,” he said.

There are three full-time production staff members: for lighting and sound, scenery, and costumes.

“I also work with all the designers,” Tusher said, “our set designer, our costume designer, our director and our student stage manager to ensure that everything is working.”

“Working on Henry V was a very fulfilling experience,” said Devany Harden, who played the role of Chorus. “The entire department came together to build the world of Henry V and I am grateful to have been a part of it.”

There were 104 hours of rehearsals just for the actors and another 35 hours of technical and dress rehearsals, according to Tusher. Additionally, hundreds of hours were spent in the department's shops, beginning in December through closing night which included construction and painting of the scenery and props, sewing and fitting of the costumes, and the hang and focus of 236 lights, Tusher said.

“While each production faces unique challenges and obstacles,” said Chelsea Ramirez, assistant director and actor, “I know we all grew close and getting to tell this story with this particular family that night was a blessing and something I will not forget.”

Tusher has brought stability to the position of production manager, according to Ramirez.

“Working with Ben is always a blast. I’ve gotten the chance to see the transitions between a couple of different production managers— no one has done the position justice like Ben has, while also making it look effortless with his wide smile and welcoming demeanor,” Ramirez said.

“Ben Tusher is a great resource to the Theatre, Film, and Digital Production Department,” Harden said. “He always has the students' best interests in mind and is an advocate for us. He makes us feel comfortable and heard.”

Tusher looks forward to opening night, but always has one eye on the next project.

“For Henry V, we had a sold-out house for opening night, which was a wonderful validation of all the hard work that everyone (actors, designers, crew, production staff) put into this production,” Tusher said.

“Once the show opens I can breathe a sigh of relief, and then we get to start all over again with our next production,” Tusher said.

A county order closed all Riverside schools including UC Riverside on March 16 due to the COVID-19 pandemic. Like everyone else, Tusher and his team are having to reimagine how they will work remotely.

“When the COVID-19 situation closed down the campus, we decided to turn our spring quarter’s production of ‘At the Pass’ into a staged reading/radio play that will be viewable online,” Tusher said.

“And, since we had already done much of the pre-production work for this play, we are going to present a fully-staged production in our studio theatre this fall as part of our 2020-21 season. 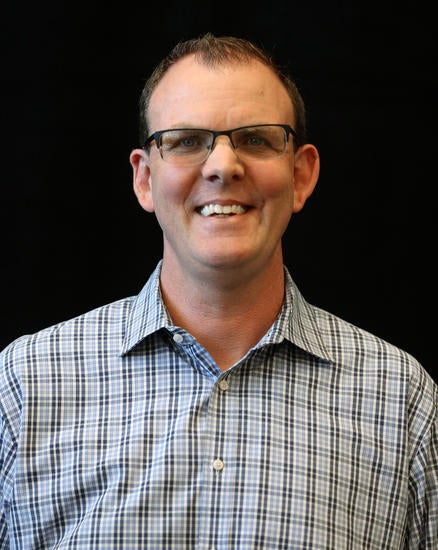 FEATURED PHOTO. Photos courtesy of Ben Tusher.
"Once the show opens, I can breathe a sigh of relief," says Ben Tusher, Production Manager and Resident Lighting Designer for the Department of Theatre, Film, and Digital Production.