Personal reflection, self-discovery and the therapeutic nature of performance

'20:20 Vision' showcases 16 autobiographical monologues by UCR acting students and their challenges of the last year
By Dr. Bella Merlin, Director of 20:20 Vision and Professor of Acting and Directing Theatre, Film and Digital Production | May 05, 2021

In March 2020, life suddenly stood still on the UCR campus and overnight we had to adapt to online learning. As it became clear that a possible two-week hiatus was quickly turning into a year-long water treading, the driving forces in the Theatre, Film and Digital Production Department (TFDP) became resourcefulness and flexibility. I was due to be directing Anton Chekhov's classic Three Sisters in Spring 2021, but by August 2020, it no longer felt relevant to take an extant text off the shelf and create another Zoom-performance. The students' own stories of what they were experiencing and how they were adapting to this moment in human history seemed far more urgent.

20:20 Vision is an original theatrical-filmic hybrid, written and performed by the students of UCR and manifested by the production staff and faculty of TFDP. Sixteen autobiographical monologues cover the four seasons: the spring of discombobulation, the summer of rising temperatures, the fall of frustration, and the winter of new possibilities taking root beneath the surface. Punctuating the seasons are five songs composed by myself, with evocative backing tracks crafted across the ethersphere in an international collaboration with Dr. David Roesner (Ludwig-Maximilien Universität, Munich, Germany).

This project has been a complete synergy of pedagogical imperatives and practice-as-research:

Re: pedagogical imperatives, the piece arose out of one of my regular classes: TFDP 109: Acting: The Process. As one of the first steps in learning the craft of acting, I invite the students to experience what it feels like both to speak from the heart and to hear others speak from the heart. That tingle down the spine when we sense that an actor is investing their complete authenticity into a role is, for me, the essence of impactful storytelling. And ever since the formalization of tragic drama with the ancient Greeks, the intent of a powerful performance has frequently been to take an audience on a journey through intense emotions to bring about a collective catharsis or release, a purging - even healing. So, the mid-term performance assignment in my TFDP 109 class is for students to create autobiographical monologues - usually on any topic about which they feel passionate. However, in Fall 2020 and Winter 2021, I specifically focused the prompts on what the students had experienced during Covid. No subject matter was excluded: whatever they felt they needed to express to a listening audience could guide the content of their monologues, always being attentive to the UCR Principles of Community. All manner of topics came up: missing college, thwarted dreams, online learning, online shopping, home and family, homelessness, bereavement, climate change, Black Lives Matter, social justice, social irresponsibility, social media, contracting Covid, mental health issues, disability, personal reflection, self-discovery, and ultimately the therapeutic nature of participating in performance. I was humbled by the stories being shared by the students and inspired by the resilience being shown. Thereafter, I invited anyone in the class (who was interested) to offer up their monologue for potential inclusion in the then nascent 20:20 Vision. Once I had received the voluntary offerings (along with those from a couple of people whom I gently chivvied, as their monologues had been so impactful in class), I looked for a dramaturgical arc to the collected texts. As an actor myself, I'm always mindful of the journey on which we take an audience: there's no point doing what we do, be it on stage or screen, unless we consider the audience - they're our raison d'être. So, for 20:20 Vision, I wanted that journey to cover the confusion of last spring, the outrage at the summer events, the sense of 'enough is enough' in the fall, and to finish with the wonderful glimmers of hope during winter 2021. Fortunately, I was able to include almost all of the students who volunteered their monologues, and fortunately all but one student (now graduated) also wanted to perform their own piece. Not all the students are “actors,” per se: some are filmmakers, some are creative writers, and indeed various departments across the campus are represented. Regardless of their acting ambitions, they each wanted to share their story, to be heard, to be witnessed, to have their experience validated and received. Again, this is the power of performance-making: taking stories that have traditionally been under-represented and, by including diverse human experiences, perhaps enhance the collective's empathy and understanding.

Re: practice-as-research, I have been working as an actor and writer on verbatim pieces and fact-based drama for many years now: from David Hare's The Permanent Way at the National Theatre, London, to Alejandro Ramirez's award-winning movie Mente Revolver, which included filming my homeless character Jenny on Skid Row in Los Angeles, blurring fiction and documentary in a startling and humbling way. I have also worked previously with Dr. David Roesner on two original fact-based musical pieces: Tilly No-Body: Catastrophes of Love (a one-woman play created at UC Davis, based on the life of German actress Tilly Wedekind) and Singing the Document, a practice-based research experiment in which David and I set to music and song some verbatim interviews on generational differences. We're fascinated by the rhythms and juxtapositions of word to melody in the human voice. To which end, the lyrics in ‘20:20 Vision’ are often inspired by words spoken in class by my students, and the polyphony of some of the songs seeks to emulate the chatter of students on the campus, rendered silent over the past year. The music ranges in style from rock to doo-wop to folksy whimsy, with a meta-Zoom song (entitled Zoom) ironizing online learning.

Indeed, we rehearsed everything through Zoom - songs, dances, iterations of the monologues. Aided in their preparation by excellent student stage managers, assistant director and dramaturg, the performers then filmed their segments independently. The singers were sent green screens, ring lights, props and costume pieces. The monologuers worked with department lighting designer (Ben Tusher) and scenic designer (Kerry Jones) to turn their rooms into film sets; they also worked with costume designer (Landis Maren York) to find items from their wardrobes that matched the color palette for each season. Most of the performers had to be their own director-of-photography, lighting designer, gaffer, costume person, make-up and hair artist, stage manager, props person, sound recordist, upload-engineer, and of course leading actor! If remote learning has taught us anything, it's independence, dependability and self-sufficiency. If this remote production has taught me anything, it's just how proud I am to be UCR faculty with such extraordinary students and dedicated staff. As I write, a team of brilliant undergraduate editors is spinning the filmed fragments into theatrical gold, under the editorial leadership of second-year student Ankai Cai. This is my first time working so intricately with the various disciplines of theatre and film in such a collaborative - and extremely fun - manner! Indeed, with my own 20:20 vision (or hindsight), there are many silver linings to the gray cloud of the pandemic and much to be grateful for that we might never have discovered had it not been for this extraordinary set of given circumstances.

TICKETS: $15 per screen. Currently, enrolled UCR students can reserve one ticket to view the online stream at no charge. Buy or reserve tickets online. 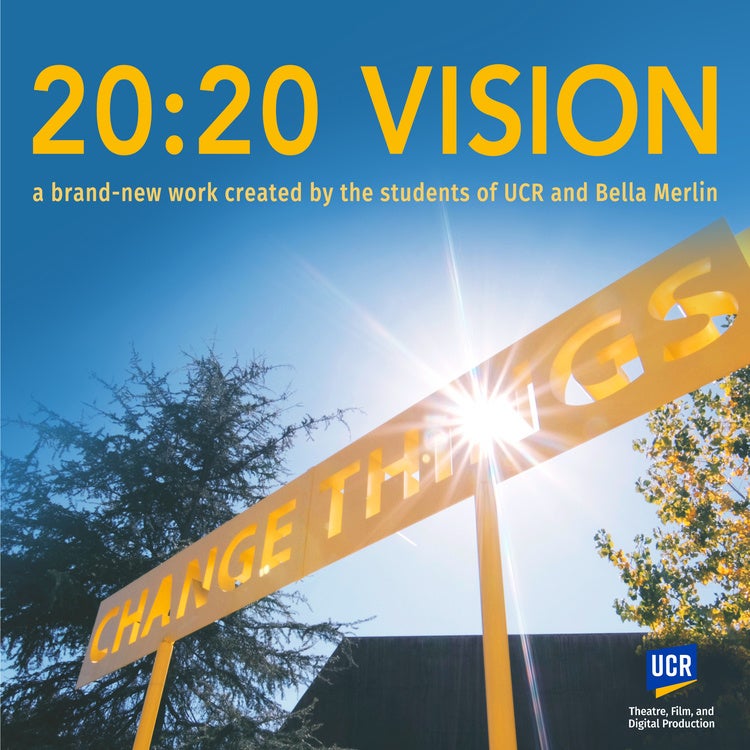